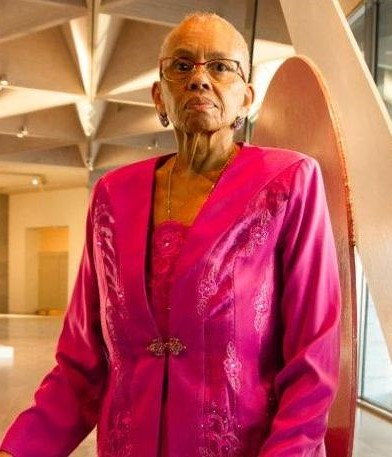 Please share a memory of Mother Lucille to include in a keepsake book for family and friends.
View Tribute Book
ROCHESTER, NY – July 16, 2021 Mother Lucille Alfreda King (nee McAlpine) was born February 17, 1937 to William Lloyd and Eva Carol (nee Pierce) McAlpine in New Haven Connecticut. Lucille was the 3rd of seven children. She completed her High School Education at James Hillhouse High School in New Haven in 1955. Later in Life she would attend SUNY Empire State College, studying political theory and social thought. She also attended Elim Bible College where she received a certificate in church leadership and Christian Counseling. Upon graduation from High School Mother King first worked in a dept store as a receptionist. She then moved to Brooklyn NY, continuing to work in department stores, where after a few years she met and married the love of her life, the former Honorable Judge Roy King. After a short stay in Syracuse, the family moved to Rochester NY in 1964 during the race riots. It was shortly after this that mother King would begin her lifelong involvement in local, state, and national, educational, political and charitable organizations. In 1972 she would replace Shirley Chisholm as a delegate to the Democratic National Convention, when MS. Chisholm began her bid for presidency. Mother King continued to serve throughout the 1970s on the Democratic National Committee, the National Black Caucus, the Charter commission, The DNC rules committee to name a few. On the state and local level, she supported multiple political campaigns, was active in voter registration, served as a parent liaison, volunteer and representative to the Rochester City School district. She was instrumental in the formation of the World of Inquiry school In Rochester. She was a commissioner for the Monroe County Human Relations Commission and a member of the A. Philip Randolph Institute. While she was an activist, mother King was also a patriot. She loved parades and attended every local parade sporting an anti-war or peace T-shirt. Later in life, Mother King worked alongside her husband as the office manager for his law office, Roy W. King, Esq. PC, until its closure in 1997 when Judge King assumed the bench. In 1982, Mother King gave her life to the Lord and her energy and passion turned to Kingdom building. Mother King served as a Sunday school teacher, a certified Christian counselor, District 5 women's workshop coordinator, Ice lecturer, co-coordinator of the Rochester area women' retreat. As a licensed missionary she served faithfully, providing countless hours of prayer, guidance, and counseling. We will never forget her sharp but loving reprimands She was a stalwart soldier for Christ, deeply committed to the missionary board and the children's ministry. Mother King always made sure the children were taken care of. They often crowded around her after church looking for gum or a piece of candy. Mother King loved her family especially at holiday time when all the family could be together. She was known for finding "strays" at Thanksgiving and inviting them to dinner, often serving more than 30 people. Her home was open to all and was a place of prayer and peace. Mother King peacefully entered into rest on Friday July 16th, 2021. She is predeceased by her Husband Elder Roy King and 2 brothers (William Jr. and Alfred). She is survived by; 4 children, Lisa, Rashid, Redmon, and Philip, 11 grandchildren, 1 great-grandchild, 4 sisters; Anna Nunez, Carol Bozeman, Madelaine Strachan and Dorothea Hall, a host of nieces, nephews, other relatives and friends. Friends may call Saturday, July 31, 10 AM to 12 Noon at New Progressive Cathedral COGIC 384 Chili Ave. Funeral Service to follow. Entombment Riverside Cemetery. Masks required
To send flowers to the family or plant a tree in memory of Mother Lucille King, please visit Tribute Store
Saturday
31
July

Look inside to read what others have shared
Family and friends are coming together online to create a special keepsake. Every memory left on the online obituary will be automatically included in this book.
View Tribute Book
Share Your Memory of
Mother Lucille
Upload Your Memory View All Memories
Be the first to upload a memory!
Share A Memory
Send Flowers
Plant a Tree